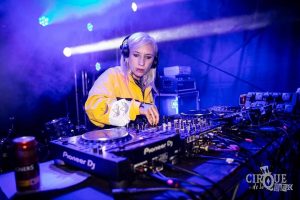 Orphic grew up partying on the London rave scene in the late 90's and began djing as soon as she could afford decks. Whilst being a passionate vinyl DJ, she is comfortable on all formats.
In 2007 she moved to Brighton where she now features heavily in the underground scene playing jungle, dnb, hip hop and a variety of other genres. Her residencies include JFB & friends, Battlejam, Cabarave, Basskonnection and Roll the Dice. She has played in a host of World famous clubs and festivals including headlining the Cirque de la Quirk stage at Isle of Wight festival. Other appearances include Torture Garden, The Scala, Volks, Concorde and The Arch, performing alongside the biggest names in music such as Randall, Black Sun Empire, Krafty Kuts and Foreign Beggars to name a few. Orphic is well known for her diverse selection and technical skills as well as her infectious ability to hype any crowd.
Read more